Goliath Games is an international manufacturer and distributor of toys and games (among the brands we market are Rummikub, Triominos, Rolit, Wordsearch, Pop the Pig, Doggie Doo, Gooey Looey, Robofish, Domino Rally and many more sold under the flag of Goliath).

Goliath is one of the few remaining family-owned and run businesses in the world of toys and games. Goliath was established in 1980 and ever since has grown tremendously. Currently we own and operate offices in France, Germany, Spain, Portugal, Poland, Belgium, Netherlands, USA (Goliath LLC and Pressman), Canada, Hong Kong and Australia (Crown & Andrews). Our head office (R&D, financial administration and logistics) is located in the Netherlands, from where we export to approximately 70 countries world-wide.

Our slogan ‘Clever Together!’ applies to our products – that combine fun and wittiness – as well as the internal processes of creating and marketing them.

Goliath Games was founded in 1980 by Adi Golad. From a one-man-one-product-one-country- show, we are now selling thousands of products, with hundreds in the team, in tens of countries.

A call in the desert…
.. Adi and Margreeth (his wife) fell in love over a game of Rummikub with the Israeli desert in the background. Shortly after their encounter, Margreeth revealed the game to her family in her home country Holland. The two of them dropped everything and followed the call that changed their life.

To cut a long story short, Adi quit his career as a mechanical engineer, married his love, traded his car for 500 games, moved to Holland and together with his wife, began selling board games on the street, because the conventional trade rejected their offering. Despite obstacles on the way, by applying grass-root marketing they popularized this one single game among Dutch people. Their persistence and efforts paid off, consequently setting and holding a world record in quantity of a single game sold per capita in one year.

We believe the magic of socio-cognitive development happens when having fun together – we contribute to a better life by creating products that stimulate ‘moments of togetherness’.
At Goliath we continuously work on the creation of innovative products that contribute to the universal need for and benefit of (social) fun.
In short we believe in the fun of being CLEVER TOGETHER. 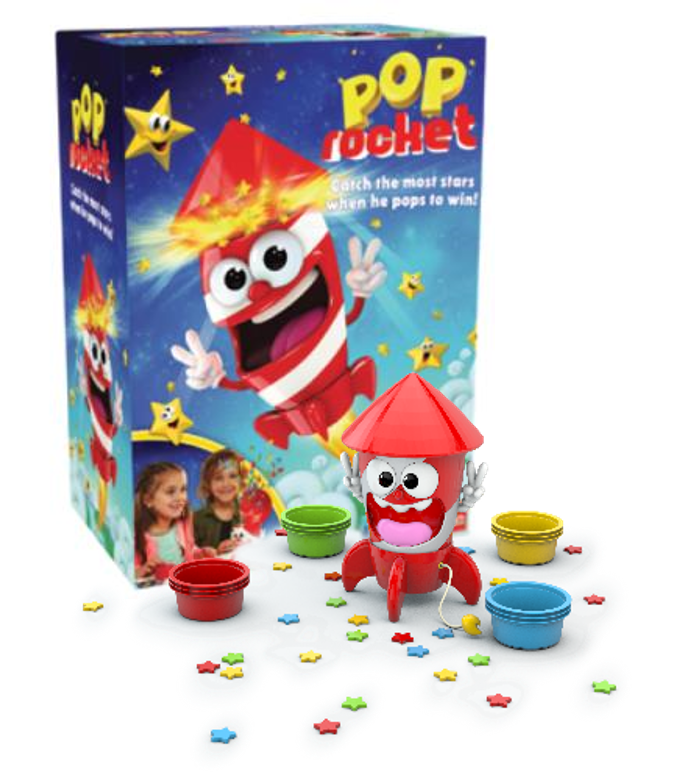 Place Pop Rocket in the middle area of play, pull the fuse and the wait for the rocket to pop! Quickly place your coloured rocket bowls around the rocket. As soon as the rocket opens, a colourful show...Lees meer